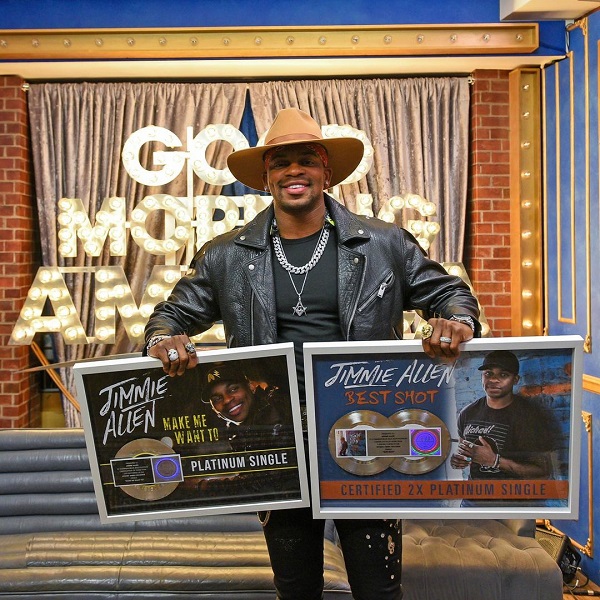 The nomination comes on the heels of Allen being crowned New Artist of the Year at the 55th Annual Country Music Association Awards on November 10 (watch his emotional acceptance speech HERE) and wrapping his run as a contestant on the landmark 30th season of Dancing with the Stars on ABC in the quarterfinals. He returned to the ballroom last night for a show-stopping performance of his hit “Good Times Roll” alongside DWTS pros and choreographed by his DWTS partner Emma Slater – watch HERE. It was also announced that he will join Dancing with the Stars – Live Tour 2022! for select dates next year.

This morning, Allen appeared on Good Morning America for their DWTS Season 30 After Party, performing his Top 10 single “Freedom Was A Highway” – watch HERE. He was also surprised with two RIAA certification plaques on GMA’s Instagram as his debut chart-topping single “Best Shot” went double Platinum and his second consecutive No. 1 single “Make Me Want To” achieved Platinum certification status.

“Congratulations to Jimmie on becoming a multi-Platinum artist! It’s been inspiring to watch his career grow through a lot of hard work and his incredible talent,” Jackie Jones, VP Artist and Industry Relations for the RIAA, remarked of the achievement. “We can’t wait to see what Jimmie does next!”

Allen’s rising star power shows no sign of slowing down. On November 25, he will help usher in the holiday season with a performance of “Freedom Was A Highway” at the world famous Macy’s Thanksgiving Day Parade in New York City.

On November 28, Allen will perform “Silent Night” on The Wonderful World of Disney: Magical Holiday Celebration at 7pm ET/PT on ABC, followed by a performance of his own original holiday song “What Does Christmas Mean” with his good friends Louis York and The Shindellas for CMA Country Christmas, airing November 29 at 8pm ET/PT on ABC.

In early December, he will join “Good Times Roll” collaborator Nelly as special guests on select dates of his “Lil Bit of Music Series” tour. On December 7, he will play the Grand Ole Opry. Fans should be on the lookout for a special announcement from Allen on December 6.

Allen will celebrate Christmas from one of his favorite places – Walt Disney World Resort – as he performs his rendition of “White Christmas” for the beloved Disney Parks Magical Christmas Day Parade airing Christmas Day on ABC at 10am ET/PT.

2021 was a monumental year that saw Allen release his latest star-studded collaboration album Bettie James Gold Edition, publish his first children’s book My Voice Is a Trumpet, take home the trophy for New Male Artist of the Year at the 56th Academy of Country Music Awards, hit the road with country superstar Brad Paisley, serve as Executive Music Producer for the Netflix series Titletown High, perform at the Kennedy Center Honors in tribute to Garth Brooks, and appear on Elton John’s newest album The Lockdown Sessions with the track “Beauty In The Bones,” among other professional highlights.

To ring in a 2022 that is surely to be even more sensational for the unstoppable star, Allen will hit the stage to perform on New Year’s Country Eve! Live From Nashville on Friday, December 31 at 8pm ET/PT on CBS.

Allen has been hailed by GRAMMY.com as one of the “5 Black Artists Rewriting Country Music” and has amassed more than 850 million on-demand streams. He is a member of the 2021 Artists Committee for the 44th Kennedy Center Honors.