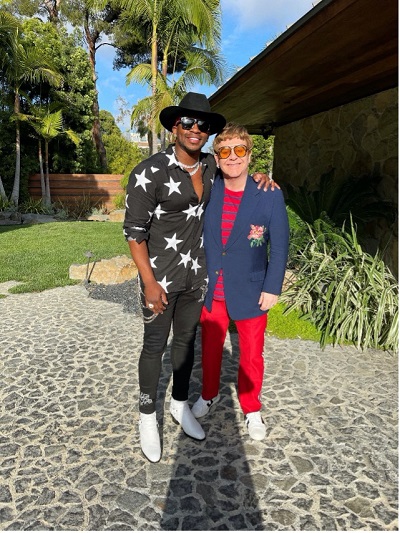 A COLLECTION OF 16 SONGS, ALL ELTON JOHN COLLABORATIONS RECORDED IN LOCKDOWN WITH SOME OF THE BIGGEST, MOST EXCITING ARTISTS IN THE WORLD TODAY

Multi-platinum singer-songwriter and ACM New Male Artist of the Year Jimmie Allen has teamed up with Elton John for a new track “Beauty In The Bones” from Elton’s new album The Lockdown Sessions, released today on Interscope Records. Listen HERE. Elton and Allen recorded the song together in early 2021.

In March 2020, Elton was forced to pause his record-breaking Farewell Yellow Brick Road tour due to the unfolding COVID pandemic. As the world began to shut down, different projects presented themselves with artists Elton had enjoyed getting to know through his Apple Music show Rocket Hour. This was the beginning of one of Elton’s boldest and most interesting records to date that he has billed ‘The Lockdown Sessions’. This album saw Elton coming full circle and returning to his roots as a session musician. While it was no easy feat recording during a pandemic, a completely new way of working for Elton, he leaned into the challenge with some magnificent results.

Allen is currently nominated for New Artist of the Year at The 55th Annual CMA Awards, where he will also perform his hit single “Freedom Was A Highway.” He is currently a contestant on the landmark 30th season of Dancing With The Stars on ABC and won the ACM Award for New Male Artist of the Year in April. His latest album Bettie James Gold Edition is out now.