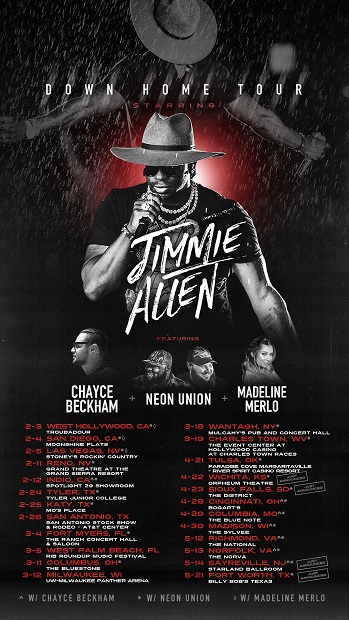 Allen also announces the 2nd Bettie James Fest at Hudson Fields in his hometown of Milton, DE on August 13, 2022. Consistently vocal about his deep reverence for his family, hometown, and home state, Allen established the festival last year in honor of his late grandmother (Bettie Snead) and late father (James Allen). The inaugural sold out event took place August 7, 2021. Details on tickets for this year’s festival will be announced at a later date.

Chayce Beckham is one of the most buzzed about newcomers in Country music today, having won over millions of hearts while competing on Season 19 of American Idol. Armed with a determination to make something of himself and the unwavering support of his family, Chayce auditioned for the competition show after undergoing a particularly difficult year to ultimately become the first-ever show winner to claim the title with an original song – kickstarting his journey to fulfilling his lifelong dream of becoming a singer, songwriter and entertainer. The 24-year-old recently released his debut song, “23” in May 2021, with the song quickly earning the top spot on both the iTunes Country and all genre charts. Now signed to 19 Recordings in partnership with BBR Music Group/Wheelhouse Records and finding his home in Nashville, Chayce is ready to dig into new music and share his signature sound with his legions of fans.

Previously announced support act Neon Union – a duo comprised of Leo Brooks & Andrew Millsaps – is the inaugural artist signed to JAB Entertainment, a full-service management and production company launched by Allen alongside partners John Marks and Aaron Benward. Their first single, “Beer Up” is available now through a distribution deal with EMPIRE. They can currently be heard on the track “Livin’ Man” off Allen’s latest album Bettie James Gold Edition.

“I’m looking forward to the Down Home Tour, my first ever headlining tour. I wanted to wait awhile before headlining because I wanted the timing to be right, I didn’t want to rush it. I wanted to make sure I was ready, my band was ready, so we could give the audience what they deserve every night – which is greatness,” Allen said of the tour’s initial December 2021 announcement. “And I finally feel like my band and I are at a point where greatness is something we can achieve. To everyone that’s supported us so far on our journey, thank you. We look forward to seeing you and a bunch of our new friends on the Down Home Tour.”

2021 was a monumental year that saw Allen receive the only Country nomination in an all-genre category for the GRAMMY® Awards, release his latest star-studded collaboration album Bettie James Gold Edition, publish his first children’s book My Voice Is a Trumpet, take home the trophies for New Artist of the Year at the 55th Country Music Association Awards & Male Artist of the Year at the 56th Academy of Country Music Awards, reach the quarterfinals of landmark 30th season of Dancing With The Stars, serve as Executive Music Producer for the Netflix series Titletown High, perform at the Kennedy Center Honors in tribute to Garth Brooks, launch the inaugural Bettie James Fest in his hometown of Milton, DE, and appear on Elton John’s newest album The Lockdown Sessions with the track “Beauty In The Bones,” among other professional highlights. He has been hailed by GRAMMY.com as one of the “5 Black Artists Rewriting Country Music” and has amassed more than one billion on-demand streams.